The team at Mploy recently helped to raise £23,000 at a charity evening to help young people with serious illnesses fulfil their dreams, including Ethan Burney, an 8-year-old boy who will lose his sight due to a rare degenerative condition.

We were very proud to be the headline sponsors of An Evening with Harry Redknapp and Paul Merson held at The Hilton hotel in Bournemouth on 22nd February 2017. The Sportsman’s Dinner fundraiser was raising money for Ethan Burney’s Wishes, Evan Parry and The Willow Foundation. The fundraising evening was well supported by local companies, and a range of wonderful auction prizes helped to raise the impressive total.

Ethan Burney is a brave 8-year old who suffers from an illness that will eventually rob him of his sight. Ethan Burney’s Wishes is a campaign to raise money to help fulfil his visual wishes before this sad inevitability. Ethan’s dreams include a trip to Disney World with his parents, as well as a chance to swim with dolphins in Mexico before he goes blind.

Another beneficiary of the evening, Evan Parry is only 9 years old and has recently battled leukaemia for a second time, with further treatment still to come. At the end of last year, Harry Redknapp arranged for him to meet his Manchester United heroes. The Willow Foundation is a charity set up to work with seriously ill young adults to have unforgettable Special Days. The charity was set up by former Arsenal goalkeeper and TV presenter Bob Wilson and his wife Megs after they lost their daughter Anna at 31 to cancer.

Highlights from the evening are available in a video on YouTube. 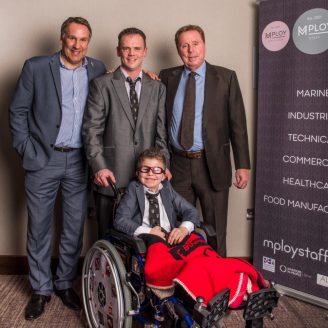